One of my favorite talks at Drumbeat Festival was Anna Debenham of Scrunchup.com.   She is young — her web bio said she began building websites at age 14.   Scrunchup.com is a magazine for young web designers who are sharing what they know.  Its mission:

We made Scrunchup because we were fed up with the lack of decent advice out there for students wanting a career in web design or development. Most of the courses on offer are out of date, and don’t teach relevant skills, and many young people come out of courses without the required level of knowledge to get a good job.

I am so inspired by the stories of young people like Anna who learn web design and development, largely on their own initiative, and set off to do this work commercially, creating opportunities for themselves by demonstrating what they can do.   Some might say that Anna is exceptional but her website shows that she’s not alone. 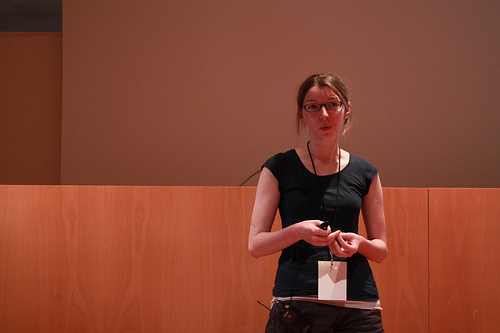 Anna looked around to see what schools were actually offering in courses on web design and development.   At Drumbeat, she showed several examples from higher education in England.   She found that the courses were not promising to teach students what they needed to know. current practices.   The coursework was hopelessly behind — preparing students for the Web of 1999, not 2010.    (Admittedly, the course description could be out-of-date even though the actual course had changed, although the mismatch is still troubling.)   Anna’s work could be the seed of a great research project — to examine what universities are offering in technology coursework and rate them on whether their offerings reflect current knowledge and practice. We should wonder whether colleges are doing all that they can to keep up with a world increasingly defined by the pace of technology change.

Anna’s point was to show that maybe colleges are not the best place to go to learn about new technology.   We need alternatives, which may not only be better but a whole lot cheaper.    That said, some of the discussion at Drumbeat around certification made me uncomfortable.   There was interest in being able to certify a web developer, especially a student who has learned on his or her own, or who has taken web courses that are not associated with degree programs.    I see the point.   Those who are self-taught can be at a disadvantage in the job market if employers insist that candidates come with the proper credentials.   Having a portfolio of current website designs may not matter if you haven’t graduated from college.   (Perhaps the employers are the ones who need to change, and maybe one day they will realize that they are excluding some of the best available talent.)

Certification may also introduce a negative side effect.   If Anna could become a developer/designer without a degree, do we really want to insist that somehow she needs to ask for one?    Do we want some other group deciding that her work deserves a passing grade and that she knows enough to be given a certificate?   It’s not just course descriptions that grow old; so do certification requirements.   I wouldn’t want another bureaucracy built around certification, especially if it came to be managed by those who might have a professional interest in limiting the number of certified designers and developers.

We don’t want to lose what’s great about informal education by attempting to formalize it.   I want to see more people start learning to be a web designer or developer based on their own own initiative.   I don’t want to have them apply or ask any one’s permission.    They start doing it and build a reputation in a community based on actual real-world performance.

Rather than focus on certification of the uncertified, we should be asked more about the value of degrees.   What if we could independently test the capabilities of students produced by college programs and compare them to those who were mostly self-taught?  Who does better?  Let’s collect some evidence and see what we can learn from it.   It may be that the meaning of a degree is illusory, and it is overvalued by students and employers.