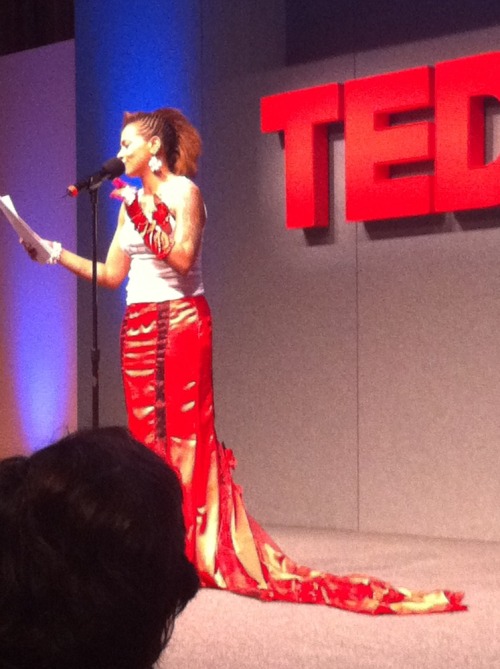 Jessica Care Moore, a performance poet and artist from Detroit, was part of the TED@MotorCity program featured at the Music Box Center at the Max Fisher Auditorium in downtown Detroit last night. I took the picture of Jessica in her beautiful red “gown” and I managed to include a profile of author John Gallagher.)  Craig Newmark was also featured on the program in conversation with Gary Bolles who curated the program for TED. It was a terrific evening. It was especially good to see so many Detroit makers in the audience. (Lish, Nick, Jeff, Dale, Bob, Andrew, Bilal, Roger, Ross, Eli and more.)

Thomas Goetz of Wired Magazine spoke about how getting better information (more immediate, more personal) will give us more control over our own health. He mentioned the Withings Wifi scale that seems like a must-have. It builds a chart on the Internet of your own weight gain/loss. He also mentioned the growing popularity of the Lose-It app for the iPhone. Lisa Gansky spoke about Mesh, the subject of her book, looking at the intersection of physical, mobile and social. “Better Things, Easily Shared” was my takeaway from her talk. John Gallagher of the Detroit Free Press talked about his book, “Re-imagining Detroit”. The challenges that Detroit faces can be an opportunity to re-think and re-build the city on a new model. He talked about how we can use the city to “Live, Work and Play.” Two personal highlights for me: A young girl came up and introduced herself — a student at East Detroit high school. She said how much she loved Make Magazine. She went to Maker Faire Detroit last year and she said that “she wished she could live at Maker Faire.” Wonderful. I encouraged her to participate as a maker this year with some of her classmates and she said they were already working on it. I also met a woman who had been a teacher in Detroit for 35 years before retiring recently. She was very excited by my talk and wanted to introduce me to others who were working on “educational liberation.” The joy of speaking at events such as TED@MotorCity is the unexpected connections you make and might not have made otherwise.

Here’s a link to photos from events taken by Benjamin Slayter.