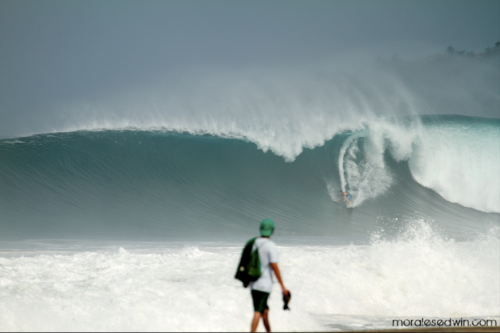 From my adventurous son …

This is the one wave I got on the big day of the swell.  The conditions weren't very good all morning, super big and very junky.  But things eventually cleaned up and I got one.  I rode the wave for a while, but the section after the one shown eventually got me.  Afterwards I watched my friend JoJo catch a good one, and then Greg got one.  And the tail end of Greg's wave cleaned me up, and I was stuck in a rip that no one would ever wish upon themselves.  Greg's wave held me down so long that when I finally made it to the surface, I took a breath as soon as possible but got nothing but foam and water in my one gasp before the next wave steam rolled me.  After that I was fighting back puking and trying to get air while seeing stars and getting blasted by the next 8 or 10 waves, stuck in the rip and getting absolutely no closer to the beach.  I tried waving for a jet ski, but no one could see me, by then I was way down the beach in NO MAN'S LAND.  Fortunately as stuff was starting to get really hard, the rip surrendered and I made it to the beach.  After that I puked and coughed the water out of my lungs and called it a day.  That was the worst beating I've ever had, I'm very glad to be here and ready for the next swell out the back.

One thought on “Best wave of the big day of swell”